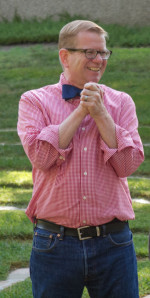 Office Hours: Vary from semester to semester. Please contact for an appointment.

Dr. Carlson’s work at CLU has two primary areas of concentration, which often intertwine: religious history; and gender and religion.

Their research in religious history focuses on the late medieval and early modern eras. They are particularly interested in how various kinds of texts (literary, theological, and academic) influence religious thought and practice. They have studied in particular the library of a late-medieval monastic college in Ashridge, England, attempting to identify its relationship to diocesan structures, the medieval universities, and English royalty during its 250 year history. They are also working on a biography of the college's founder, Edmund earl of Cornwall, whose heart was interred at the college with that of another man, Thomas Cantilupe, Bishop of Hereford. Carlson's work studying an all-male, medieval, intellectual enclave relates to their second area of study.

Carlson’s work on gender began with an interest in the constructions of masculinity and femininity (and other gendered expressions) in the late medieval and early modern periods, but has expanded to include theologies of sexuality and gender construction across religious traditions in the present day. They are particularly interested in incarnational theology -- what they call in-bodied theology – and seeks to interrogate the performative roles of gender in all of their classes. They have taught Gender and Religion and Queer Theology here on campus, and Carlson is Director of the Gender and Women’s Studies minor, working closely with a broad range of academic disciplines to expand the course offerings for the program. As a part of their interest in gender, they are one of the faculty advisors for Feminism Is... student club, and can be found meeting regularly with another student club, PRIDE (People Respecting Individuality, Diversity, and Equality).

In addition to their work in religious history and gender, Carlson has additional qualifications in Literature and Religion, American Religious History, Muslim-Christian Relations, Queer Studies and Religion, and the History of Christian Monasticism. Carlson was the 2013 Huntington Fellow at Lincoln College, Oxford; they have been invited to present papers at conferences nationally and internationally; and they have contributed to various encyclopedias and written several articles and book chapters. Their chapter, "The Art and Craft of Dying – Death in Early Modern English Faith and Literature," can be found in the Oxford Handbook of Early Modern Literature and Religion (OUP, 2017). They are currently working on a book of queer readings of the Revised Common Lectionary, as well as on a biography of the Edmund Cornwall, the founder of Ashridge.

Carlson is a sketchy Christian, but a committed Episcopalian, and gives presentations at a number of Southern California religious communities on the history of the Christian church, the pursuit and quality of sacred space, medieval history, and the history of gender and marriage. Carlson also regularly preaches and leads worship services.

Dr. Carlson lives with their spouse, Eric Kamm, in Camarillo. They are also honored to sing with the California Lutheran University professional chamber group, Areté, under the direction of Wyant Morton. When not walking, singing, talking about theology, or celebrating food with friends, Carlson reads mystery fiction, cooks, and has participated in AIDS LifeCycle, for which they raised over $3000, riding a bicycle from San Francisco to Los Angeles to provide care for AIDS patients who could not afford their medication. Carlson is evangelical about rugby, and is advisor to the Cal Lutheran Knights rugby club, but does not play, because they've donated enough blood already.