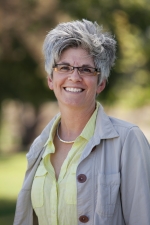 The Rev. Dr. Shauna Hannan is Professor of Homiletics at Pacific Lutheran Theological Seminary (of California Lutheran University) and Core Doctoral Faculty of the Graduate Theological Union (GTU) in Berkeley, CA. Dr. Hannan received her Ph.D. in Practical Theology (Homiletics) from Princeton Theological Seminary. Her published work can be found in Word & World, Dialog, Currents in Theology and Mission, Journal of Lutheran Ethics and Ecumenical Trends. You can find her biblical commentaries for preachers on workingpreacher.org, in The Christian Century, New Proclamation and Sundays & Seasons. She is co-editor of Eco-Lutheranism: Lutheran Perspectives on Ecology. Dr. Hannan has been an ordained pastor in the Evangelical Lutheran Church in America (ELCA) since 1998. Currently, Dr. Hannan serves on the candidacy committee for Pacifica and Southwest CA Synods and is rostered in Rocky Mountain Synod of the ELCA. Hannan's book, The Peoples' Sermon: Preaching as a Ministry of the Whole Congregation will be released by Fortress Press in the Fall of 2021. She is currently researching and writing on how the craft of filmmaking (especially screenwriting) can serve the craft of preaching.