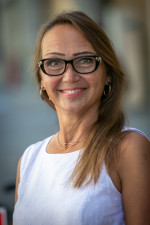 Kirsi Stjerna, a native of Finland, is a Lutheran theologian engaged (in her own words" in "critical and compassionate" examination of the relevance of Luther's freedom theology for the contemporary world. Educated in Helsinki University, Finland, with the late Tuomo Mannermaa and in Boston University with Carter Lindberg, she has broad interests in the Reformation scholarship and with the sources in Christian theology.

Stjerna's book Women and the Reformation (Wiley 2008) broke new ground by bringing women's theological voices to the conversation. Her newest book Women Reformers of the Early Modern Europe: Profiles, Texts, and Contexts (Fortress/Media 1517, 2022) features original and cutting edge work of over 30 international scholars and is designed as both a teaching and reference tool.

In her Luther scholarship, she has focused on theology of faith, freedom, and sacraments, and critical uprooting of antisemitism in Christian argumentation. The Annotated Luther, Vol. I-VI (Fortress, 2015-2017) was a major undertaking that saw its completion in the Reformation anniversary year. In 2021 she published Lutheran Theology: A Grammar of Faith (Bloomsbury/T&T Clark), taking a look at the history, vocabulary, basic tenets, and future possibilities of Lutheran teachings as freedom theology.

In addition to serving full-time at PLTS, Stjerna teaches at the Core Doctoral Faculty at Graduate Theological Union, both in Theology and Ethics department, and in Historical and Cultural Studies of Religion department Ethics (Chair, 2022-2023). Until summer 2022, she served as the Chair of the Local Committee for the  14th International Congress for Luther Research, hosted at California Lutheran University, Thousand Oaks, CA, in August 2022, where she also led a seminar on "Luther and Religion" with Christopher Ocker (GTU).

Martin Luther and the Global Lutheran Traditions Group of the American Academy of Religion , Co-Chairing with Deanna A. Thompson and Vitor Westhelle. 2007-2017

Dialog: A Journal of Theology. 2013-ongoing.

The Encyclopedia of Martin Luther and the Reformation. Rowman and Littlefield. 2015-2017.

The Significance of Feminism and Gender Studies in Academy and Beyond, Aarhus, Denmark, "Hermeneutically Suspicious and Spiritually Constructive: the Gift of Feminist Scholarship in (Late) Medieval and Reformation Studies." June 2-3, 2022.

Webinar, by LWF: "On Being Lutheran: Spirituality", keynote presentation, October 2020.

Webinar, by ELCA Wittenberg Center, "A Conscience Captive to God's Word: the 500th Anniversary of Luther at the Diet of Worms, April 16, 2021, keynote presentation, with Martin Lohrmann.

Luther, the Jews, and the Bible. Hunter College, New York. April 24, 2018. A symposium with Visnu Adulri and Brooks Schramm. Presenting: “Luther and the Jews in his world”.

Passion and Persecution: The Music of Bach, the Gospel of John, and Religious Intolerance.

PBS documentary, Martin Luther: the Idea that Changed the World, 2017, participating in interviews.

American Academy of Religion, 2017, Boston, Mass. Martin Luther and Global Lutheran Traditions. Moderating and Responding in two panels addressing the Reformation 500th anniversary and the relevance and urgencies of the reformation theologies for the future, globally speaking.

Concordia Seminary and McGill University. May 8-9. 2017. "Reformation and the City." Presenting: “The Reformation Call for Freedom – and Freedom in 2017.”

Luther and the Subaltern. A study symposium, PLTS, Berkeley, March 9-11, 2017. Co-hosting and presenting: "Gender and Luther."

Luther's theology and spirituality; feminist  and gender approaches with Luther and Reformation; and the Finnish Luther School.

Women and the Reformations.

Lutheran theology, sources, and hermeneutics with contemporary concerns for freedom, equality, and justice.

Luther and the Jews.

Luther and the Book of Genesis, especially the creation and the fall of Eve.

On the Apocalyptic and Human Agency: Conversations with Augustine of Hippo and Martin Luther. Eds. Kirsi Stjerna and Deanna A. Thompson. Cambridge Scholars Press, 2014.

Women and the Reformation. Wiley Blackwell, 2008 (translations in Finnish, Korean, and German).

The Dictionary of Luther and the Lutheran Traditions, ed. Timothy Wengert et al.

“A cautionary tale: Luther and the Jews, and rejecting anti-Semitism”. In The Forgotten Luther II. Edited by Ryan Cummings. Minneapolis: Fortress Press, 2019.

“Luther and Feminist Thought”. A special theme issue in the Journal: Religions, Open Access; guest editor, and the author of the invitation and the epilogue. Spring, 2020.